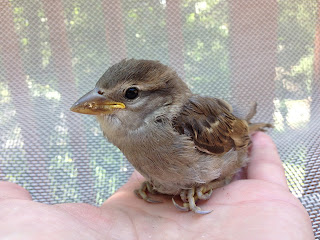 I work for a family in lower Westchester and they own a cat. I saw the cat at the back door. As usual, he was carrying something in his mouth. I carefully opened the sliding door and put my hand around his collar to retrieve a bird, which he let go of fairly easily. I put the cat in the house and inspected my friend. He didn't look well but he was alive, so I named him Cletus.
Cletus just sat there in my palm, not using his legs at all. One of his wings was disheveled and the other stayed close to his body. He was dazed and highly stressed. He would just topple in my hand and I would set him upright. I have a lot of experience with dogs and cats. I feel like I could handle an injury to mammal friends without a second thought. I didn't have a clue how to help Cletus.
I had a lot of work left to do before I could set off getting my friend to a bird sanctuary. I left him in the shade with a saucer of water. I must have called at least ten numbers and left several messages. All the numbers were for people in the community that rehabilitated birds in their spare time. No one returned my calls and I started to panic because my work at the house was done.
Now I have this injured bird that I felt responsible for, and not a clue how to help it. I could feel myself getting frustrated. I had messaged my boyfriend about my predicament and he sent me the number to the DEC. I called them and they listed off all the numbers I had already tried. The woman from the DEC mentioned that the numbers were to private citizens volunteering their time to bird rescue, they most likely work day jobs and I would have to wait for someone to call me back. I told her my work was done for the day and I had an hour commute back to my house. She then gave me a number to a veterinarian across the Hudson River that worked with bird rehabilitation. Maybe they could offer some advice.
I wrapped Cletus in my sweater, which he immediately pooped in, and went to sit in my car to try to figure things out. I could have easily just set him in the woods and be done with it. I was determined to at least allow Cletus the opportunity to survive or be euthanized humanely. I called the veterinary hospital from my car with this little bird on my lap staring up at me. The receptionist suggested taking Cletus with me if I felt he was truly injured, and get him treatment at the rehabilitation center close to my house. It wasn't recommended to feed him, and it's best to release bird friends back to where they were found. This was turning out to be a lot of work.
By this time, Cleuts was using his legs but he was still toppling over. It had been three hours. I felt enough time had passed and he wasn't going to rebound without help. I started my car and Cletus's eyes got huge and he got really stiff in my lap. The sound of my engine snapped him awake and alert. I started to drive away from the house. By the time I got about two blocks away, he pops up, fluffs his wings and starts hopping around. I couldn't believe it. I had to pull my car over and set him back in the middle of my lap. Cletus was going to be alright.
I brought him back to the house and found a tree close to where I had initially rescued him. I held my sweater high up to a limb. He hopped right off my sweater and onto the limb. I said my good-bye knowing I had done all that I could.
I only had one person call me back from all those numbers I called. Not even the bird sanctuary close to where I lived returned my call. If Cletus was really injured and I had taken him to my house, he'd sill be here. I'm grateful he bounced back.
I have found fledgling birds that had fallen from the nest before. If this ever happens, don't pick it up. The parents are usually close and will help it get to safety. If the fledgling is in danger, place it in a safe place close to where you found it. Birds will retrieve their young even if you handle it, but keep handling to a minimum.
Hopefully my experience rescuing a bird will help you if you ever find yourself in the same situation. I highly recommend getting advice before taking action. If you own a cat, I highly recommend keeping them indoors. Here are some articles on this subject.

themalathemission
I truly believe we can heal the planet with the power of present minded awareness, intentional living, and by putting the interest of all beings before our own. "None of us are free until we are all free."